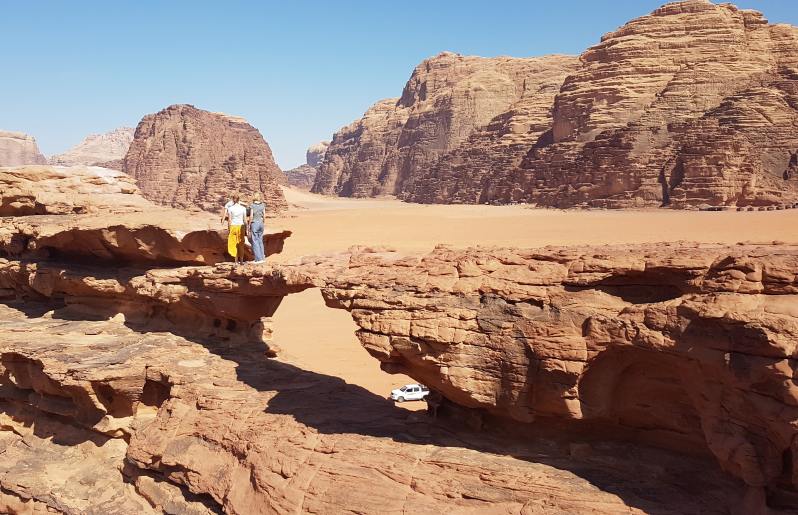 What to do on holiday in Jordan

Jordan is an easy flight from the UK, reachable on the budget airlines at fares never seen before. You can get your visa upon arrival at the modern and efficient International Airport in Amman, a 40 minute car drive to the centre of the city. If you want to go somewhere that is truly different – but without the jet lag – then Jordan is definitely worth considering.

There are several World famous attractions in Jordan that every visitor should include on their holiday.

For a few centuries about 2,000 years ago Petra prospered as it controlled the lucrative trading routes from Asia to the West and Africa. It had canals and channels bringing water to it from collection tanks and springs, allowing it to irrigate crops in the dessert. It build large monuments and tombs for its rulers, the most famous being The Treasury, featured in many films including Indiana Jones.

Many are ruined today but walking down the narrow gorge to enter the city is one of the most atmospheric walks you will do anywhere in the world. Its sides are worn smooth by water, exposing contours and layers in the rock that glow red, orange and brown in the sunlight and shadows. You turn corners to find carving and tombs hewn from the rock before it opens up and you find the city sprawling before you. When you go, don’t forget to book tickets to the evening show – walking down the gorge by candle light is a wonderful experience.

This is the largest valley in Jordan, a perfect desert landscape that combines areas of plain and sand dunes with eroded hills and outcrops of rock. It such a desolate landscape that its also known as the Valley of the Moon. If you want to experience some desert then this is the place to go. Its been used in many films as a location, from Laurence of Arabia to The Martian and the latest version of Disney’s Aladdin.

There are plenty of local operators who will take you out into the Wadi in 4×4 vehicles. You can climb sand dunes, visit ancient inscriptions and rock formations. On some dunes its also possible to snowboard down them. Most people spend the night and there are plenty of camps to choose from, from the basic to the luxurious. There are even pods with glass ceilings so you can view the amazing night sky from the comfort of your own bed.

This large Salt lake is situated in Jordan’s West, creating part of its border with Israel. At just over 430 metres below seas level, its the lowest point on land on earth. Its water level has been dropping for many years, mainly because its main source of water is the River Jordan which feeds the lake from the north. The waters from the river are taken by several countries for both drinking and irrigation, meaning that hardly any water is left by the time it runs into the Lake. There have been plans to run water from the Red Sea to the south into the lake, using the 430 drop as a natural incline. This water would be desalinated and used as drinking water and the brine put into the Lake to increase its level. These plans are currently on hold.

When you visit you can enter the water, although swimming is impossible. The salty water means you float high on its surface, allowing you to float and relax with no threat of sinking. The mud from the sea are also reputedly good for your skins and there are many treatments you can enjoy.

At the very south western point of Jordan lies a stretch of coastline of the Red Sea and the modern town of Aqaba. Why not spend a few nights here enjoying the sunshine and swimming in the warm waters? There is some great snorkeling to be done and also diving in some places.

The capital Amman is a comparatively new city with a modern urban feel. Many of the older quarters have been redeveloped into modern areas but there are still some great street bazaars to visit where normal citizens go about everyday life – a far cry from the touristy bazaars in some countries. In the heart of the old town is the Citadel, with the remains of the Roman city still visible on it and an intact theatre in the slope below. Nearby is the excellent National Museum with an excellent display on Petra.

As well as the citadel in Amman there are also the Roman ruins at Jerash to see, one of the best preserved sites from Antiquity. If you like Mosaics then head to Madaba and its famous map mosaic. If you are a keen archaeologist then get your guidebook out and plan a route as there is plenty to see.