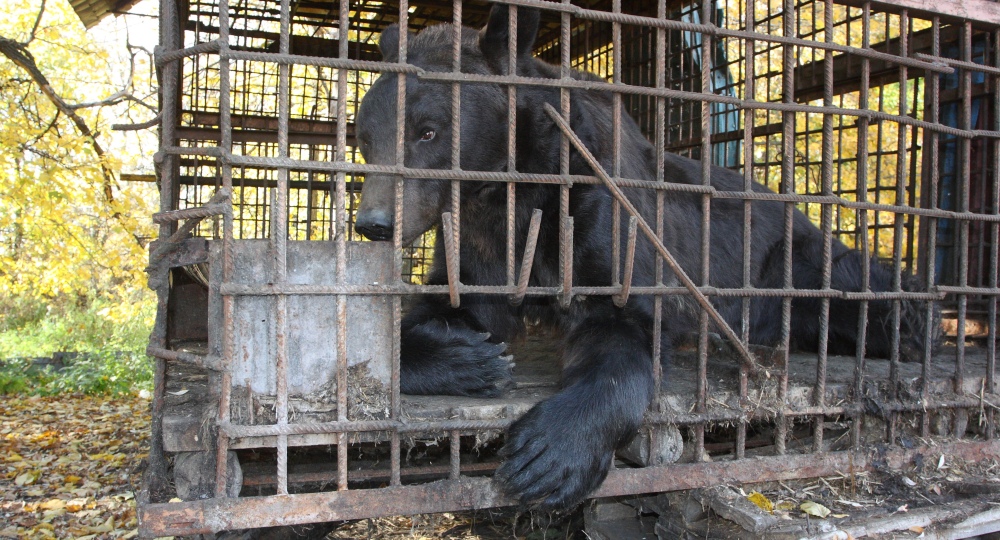 The Asian Black Bear has a long, black coat with a distinct crescent on the chest which can be yellow, white or cream in colour. This medium-sized bear is also known as a Moon Bear and can be found in many parts of mainland south east Asia. Males can weight up to 200kg, while females are considerably lighter, weighing up to 125kg. They are natural tree climbers, helped by a powerful body, short hind legs and strong, curved claws.

Many of these bears are kept in bear farms where their bile is harvested for use in Chinese medicine. Explorers Against Extinction, the front line conservation charity we support, is campaigning against this cruel practice with Animals Asia as one of its 2020 campaigns.

The Moon Bear can be found across areas of south east Asia. From Iran in the west the distribution of the bear reaches in to the Russian far east and on to the Japanese islands of Honshu and Shikoku. Although they still have a large geographical range which includes countries such as Afghanistan, Pakistan, Myanmar and China, their population numbers have declined, largely due to habitat loss.

The habitat of the bear is primarily forested areas, though this can change with the seasons and the need to find food. They can spend 50% of their lives in trees and are the most arboreal of the bear species. However, the location can also determine habitat and in some areas they may live on alpine meadows or in much sparser forest areas. Bears living in Himalayan regions may also move down to areas of lower elevation during the colder months.

These bears are omnivores, eating largely fruit, berries and nuts when they are in season. However, the diet can become very diverse as the bear adapts to the seasons and the availability of food sources. They will eat insects and larvae, with their sharp claws being ideal for accessing termite mounds. Though their diet is predominantly plant and insect based, they will occasionally eat meat. This can include foraging for carrion, but sometimes they will hunt smaller animals when needed.

The Asian Black Bear tends to be a solitary animal, except during the mating season which is usually late summer. The female will give birth to two cubs following an eight month gestation period, weaning the cubs for around 100 days. The cubs become independent of the mother after two to three years. Whether bears are active during the day or at night can depend on location. Although they tend to be more active during the day, bears living in an area with a higher human presence may become more nocturnal to avoid coming in to contact with people.

While pregnant females will hibernate over the winter months, hibernation patterns can otherwise vary depending on geographical location. The bears living in the Northern most areas hibernate, but in other areas inhabited by the species the bears will move to warmer climes, possibly at lower levels. Those who hibernate will tend to do so from November to March, possibly preparing a den and moving in a month or so earlier if conditions have already turned harsh.

The bears are currently classified as vulnerable by the International Union for Conservation of Nature (IUCN). Their powerful build means they have few predators, one of these being tigers. Habitat loss through logging and deforestation and other human activity such as hunting places their numbers at risk. This particular species of bear is hunted for the gall bladder, containing the bile used in traditional medicines. The diverse range of the populations of the species also affects breeding, leading to problems from a reduced genetic diversity.