What to see & where to go in Japan

Japan is a country where modern life seems to fuse seamlessly with ancient traditions. It’s culture is not only deep-rooted, but has also managed to evolve so that its always looking towards the future. If there’s something that the country manages to do well is to set modern innovations alongside ancient traditions.

It is a fascinating country to visit. It has developed its own unique modern world feel, not confusing, as so many places have, the belief that to becoming modern and Western are the same things. It has kept its soul while becoming one of the most technologically advanced places on earth. This is seen everywhere – you will go to visit an ancient temple on a bullet train or walk to an old palace down a neon covered street.

So where should you go and what should you do  to get the most out of your visit? It certainly pays to be organized. Unlike many places maps and street signs are only in Japanese so its easy to get lost. Make sure you have a good guidebook to Japan and map before you get there.

This city served as the imperial capital of Japan for a thousand years today is home to over a thousand temples. You will find meditative temples such as the Ryoan-Ji that has an beautiful Zen rock garden and monumental ones like Kinkaku-Ji, with its stunning pavilion encrusted in gold leaf.

Temples are just a start of what the city has to offer: there’s the art of the geisha; the tea culture that can be appreciated in any of the numerous elegant tea houses; the rich food culture such as the kaiseki (traditional haute cuisine); and also the iconic performers of traditional dance and music. Its worth staying for a couple of nights to really appreciate and enjoy the best of the city.

You shouldn’t be surprised to come across locals who tell you that a distinct aspect of their culture, i.e. something that wasn’t influenced or imported from mainland Asia, is their traditional bath. Japan is located on the Pacific Rim of Fire, a geologically active area and is highly volcanic, resulting in hundreds of hot springs (onsen) scattered across the archipelago, and which are used to assist to naturally heat the baths.

The process has been transformed from a simple task into a traditional ritual religion. This helps explain why the entire country is dotted with shrines and temples to facilitate this most relaxing form of worship. Every visitor to the country ought to experience one.

Tokyo is one of the cities in the world that is forever reaching into the future. Over the years, it has developed a reputation of always trying to push the boundaries of what’s possible. This has seen it continue to build tall and sleek structures over the densely populated, earthquake-prone land.

The city also happens to be a top spot in the country for architecture and contemporary art, entertainment, pop culture, drinking, shopping, and a tie with Kyoto for fine dining. However, the one thing that makes the city stand out is not its many sites, but the city itself, which has a reputation for exciting its visitors. Part of its attraction is just being there and watching life happening. It’s population cram the streets as they go about their lives and to experience the subway during the rush hour is probably best avoided – Attendants with padded pushers cram the commuters onto the carriages to allow the doors to close on the packed trains

The city can best be described as a sprawling, organic beast that stretches as far as the naked eye can see. It’s always changing and is made up of a diverse grouping of neighborhoods meaning that no two visitor experiences are ever similar. 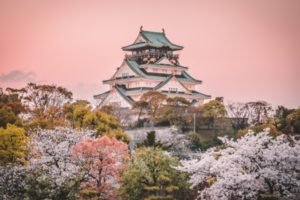 Countless trees and orchards in the country start to burst into bloom during the spring. It’s a spectrum that runs from pale pink to rich magenta. For locals, it’s thecue for them to start gathering along river banks and parks for an event called hanami, or cherry blossom viewing parties.

The tradition dates back many centuries and is one that is passed from one generation to the next. Often, the blossoms only last for a week or two, which is symbolic of the fleeting nature of life, and which acts as an important reminder that one ought to seize the present. You can do this by joining the locals in the cherry blossom viewing festivities.

Staying in a Ryokan

A Ryokan simply refers to an ‘inn.’ When the term is used today, it refers to an inn that has an attitude towards local traditional culture and a given aesthetic. Ryokan comes with a woven reed mat (tatami) where the visitors get to sleep on quilted mats (futons) as opposed to spending the night on modern beds.

The Ryokans tend to be low-slung buildings that have winding corridors made from highly polished wood. Upscale Ryokans have personnel who were kimonos and who have undergone professional training to better attune them to the needs of their guests. Such facilities will also serve exquisite dishes prepared using local, seasonal ingredients.

Mt. Fuji is a sacred place in Japan and holds a special place in the psyche of the country. It is a backdrop to Japanese life, depicted in art through their history. It will still take your breath away even when viewed from a distance. Its perfectly symmetrical cone is perfect for a country that values symmetry and order. It is the highest peak in the country and watching dawn from its summit is as experience you should do and one which is both rewarding and memorable, a pilgrimage of sorts that has been done by countless people over many certuries.

The mountain is now climbed by hundreds of thousands of local and international tourists each year. It’s something that has helped to continue an age-old tradition of local pilgrimage up the sacred mountain. If you would instead prefer to look for a picture-perfect view from the nearby peaks which are less daunting, you can do so by following in the steps of the country’s renowned poets and painters and walking on lower trails to vantage points.

Tsumago and Magome refer to two post towns that are located along the old Nakasendo. This refers to an old footway (mainly used by messengers and lords alike) connecting Kyoto and Edo (now Tokyo) during the medieval period. Though old, this path is paved with large stones. Trekkers can easily hike the 7.8 km connecting the two towns via the cedar forests, sleepy alpine helmets, rice paddies, and past waterwheels.

The two towns are themselves a treat, with low-slung dark woven structures, narrow lanes, craft shops, and noodle restaurants. After the bustle of Tokyo it is like stepping back in time.

Modern-day Hiroshima is a forward-thinking city made up of attractive boulevards. A visit to the Peace Memorial Museum gives one with a better and harrowing insight of the kind of damage that was wreaked by the atomic bomb that was dropped on the city during the Second World War. Even though a visit to the museum is always heartbreaking, it does serve as an important history lesson that must never be forgotten

At its heart is the park designed by Tange Kenzo, a great modernist that surrounds the museum and provides many of it’s visitors with an opportunity for quietreflection. However, the spirit of determination in the city coupled with its great cuisine ensures that all visitors get to leave with good memories.

Japan is a country like no other and you will leave having enjoyed a real insight into a culture alien to many others but with a high culture, memorable attractions and unique cuisine.