Petra is located in the Hashemite Kingdom of Jordan and with over 1 million visitors a year is the countries most popular tourist attraction. Often it called the Rose City because of the colour of the stone from which it is carved and built. It was known to the people who founded it as “Raqmu”, only getting its modern name when the Romans annexed the city in the 1st Century AD and changed its name to “Arabia Petraea”. 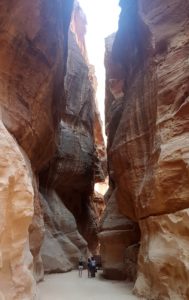 The site of the city has been inhabited for thousands of years by herdsman and small settlements. It was the arrival of the Nabataeans as early as the 4th Century BC that started a change in the areas fortunes. This tribe of nomadic Arabs settled and using their knowledge of desert living built up a prosperous settlement. They built canals and channels to collect the rains and store them for use during the rest of the year.

This allowed them to grow crops to feed themselves and the cities strategic position on many trading routes allowed them to control this trade and charge duties on the goods that transited through and were traded there. As they prospered, so they came to the attention of the Romans who made them a vassal state in the 1st Century BC. The city continued to grow until it reached its zenith in the 1st Century AD when its population was over 20,000 and many of the buildings and monuments you see today were constructed.

This includes the World-famous Treasury, actually the tomb of King Aretas IV and known as “Al-Khezneh”. It was believed by herdsmen in the 19th

century that is you could break open the carved stone urn on the top of its pediment then gold would cascade out. To this day you can see the pock marks of the musket shots they fired to try to become rich.

In the 2nd Century AD the city’s fortunes changed as trade was increasingly done by sea. Its population declined and after a large earthquake in 363 AD it never recovered. A few hundred years later it was only inhabited by a few herdsman as its infrastructure had crumbled away leading to little of no water being available during the hot, summer months. It faded from memory until rediscovered by the Swiss Explorer Johann Ludwig Burckhardt in 1812. 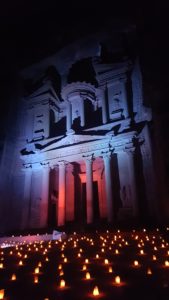 Petra was made a UNESCO World Heritage site in 1985 and in 2007 “Al-Khezneh” was made one of the New 7 Wonders of the World. At least a day is needed to explore as the site covers a large area – the tomb known as the Monastery is a 2 hour walk from the entrance. What makes Petra so spectacular is the walk in to it. You enter the “Siq” a 1.2 km long gorge that was created by water eroding through the soft, pink rock. It twists and turns, a small water channel cut into its side, until it dramatically arrives at a small opening and in front of you appears “Al-Khezneh”.

Three times week the site is opened during the evening in an activity called “Petra by Night“. The “Siq” is lit by hundreds of small lanterns and the walk down to “Al-Khezneh is very atmospheric. The tomb itself is lit by fading floodlights of different colours and the Bedouin play drums and sing. It runs on Mondays, Wednesdays and Thursdays, starting at 8.30 and allowing 2 hours for the trip. It makes the City of Petra feel alive once more.

More details, maps and guides can be found at the website of the Petra Development and Tourism Regional Authority at visitpetra.jo