Trekking to see Orangutans in Sumatra

By Robert Ferguson April 9, 2020 No Comments

Gunung Leuser National Park covers just under 8,000 sq.km of Northern Sumatra. It takes its name from Mt. Leuser (3,119 m), part of the Barisan Mountains and the highest point in the Park. Its terrain is rough and mountainous, one of the reasons it has survived being turned into Palm Oil Plantations despite encroachment in some zones. 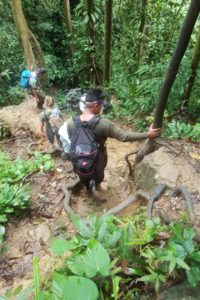 The starting point for most treks into the National Park is Tangkahan, a small village on the eastern edge of the Park and a 6-7 hour drive from Medan, the nearest International Airport. There used to be an Orangutan sanctuary here that rehabilitated and released orangutans back into the wild that had been rescued from being pets. The village plays an important role in local conservation and many of the inhabitants who now earn their living through Tourism used to supplement their subsistence farming with illegal logging.

There are a number of small guest houses and lodges, as well as shops and cafes. There is also a National Park Visitor Centre. Guides and porters can be arranged either at Tangkahan or, if you have a tight timetable, in advance through a tour operator. There are day walks as well as overnight treks, with most guides and trekking agencies having their own camps in the Park itself. They are allowed to do so under license to the National Park and at the end of every season all equipment and tents must be removed, the sites returned to their natural state.

Trekking in the Park is quite demanding. As you would expect in a rain forest it is hot and humid. It is also steep, especially if you walk deeper into the park. Good sunscreen and a sun hat is vital despite the tree canopy as the sun is strong, and a strong insect repellent recommended.

Because of the released, rescued orangutans your chance of seeing one of these amazing animals is good. Several of the older orangutans who were in captivity a long time live wild in the jungle but don’t travel far, staying in the proximity of the village. many are females which attracts the wild males to come to mate with them.

The further you trek, the rougher the terrain gets. Trails are more indistinct and overgrown (Long trousers and long sleeves area  must) and when climbing down to cross streams and rivers you often have to scramble using your hands. The rewards are amazing. Orangutans in their natural habitat. They have little fear of humans in this area and will often come to watch you as you observe them. There are mothers with babies, come with 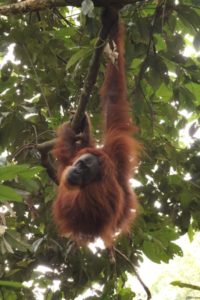 males. Older males, with their extraordinary Moon faces may walk past, unperturbed by your presence,. You must keep at least 10 metres form them to reduce the risk of them catching a human illness but sometimes it is hard to do as they almost brush past you as you stand watching.

The camps are on the banks of small rivers, giving the chance for a cold plunge or dip of the feet. Tents are provide, along with foam mattresses, and food is prepared for you – local delicacies all cooked over an open fire. Take hand-sanitizer to clean your hands and a water filter to clean drinking water. Toilet facilities are a long drop toilet in the nearby jungle.

Other creatures you can see are sambar deer, wild pigs, gibbons and a myriad of bird life including Hornbills. The park is also home to Sumatran elephants and Sumatran rhino but not in this area.

Its is an amazing experience that is highly recommended. Just remember: Keep your distance and make sure you bring all your rubbish out of the park with you.

Robert Ferguson is a Trustee of RWCT.